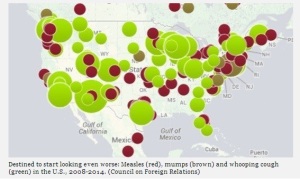 The Los Angeles Times recently published a piece titled: “Measles is spreading, and the anti-vaccine movement is the cause”, and as you can imagine, this caught my attention.

Recently, I have had an empirical paper published in the open-access journal PLOS ONE, with Karen Douglas, my co-author and PhD supervisor.  In two studies, we investigated the potential impact of anti-vaccine conspiracy beliefs – such as the belief that research on vaccine efficacy is manipulated to make profits for pharmaceutical companies -, and exposure to anti-vaccine conspiracy theories, on vaccination intentions.

In the first study, we surveyed 89 parents about their views on anti-vaccine conspiracy theories and then asked them to indicate their intention to have a fictional child vaccinated.  It was found stronger belief in anti-vaccine conspiracy theories was associated with lower intentions to vaccinate.  This relationship was found to be explained by three factors: perceived dangers of vaccines, feelings of powerlessness and mistrust in authorities.

In the second study, using an experimental design, we aimed to replicate and extend these findings by investigating the casual relationship. To do this, we exposed 188 participants to information concerning anti-vaccine conspiracy theories or information refuting such theories.  We also included a control condition where no exposure occurred.  It was found that exposure to pro- conspiracy material reduced their intention to have a fictional child vaccinated, relative to those who were given refuting information, or in a control condition.  The same factors again explained this relationship (perceived dangers of vaccines, feelings of powerlessness and mistrust in authorities).

Referring back to the Los Angeles Times piece, our research certainly provides some evidence towards their conclusion.  Here, we suggest that anti-vaccine conspiracy theories may have more than a trivial effect on vaccination intentions.  Our work demonstrates empirically, and to our knowledge for the first time, that anti-vaccine conspiracy theories may therefore present an obstacle to vaccine uptake.  The implications of this work has the potential to be wide reaching, such as highlighting the importance of public policy taking in to account conspiracy theories (as discussed previously on this blog), and also calling for further investigations to identify the social consequences of conspiracism.

We also found some other interesting things as well – such as relating to the role of misinformation, and the potential for conspiracy information being resistant to correction. As PLOSONE is an open-access journal, where it is available to all, if you are interested in reading the whole paper, you can for free.

This entry was posted in Social psychology, What's the harm. Bookmark the permalink.