Childhood vaccinations: What is the role of conspiracy theorising?

On Wednesday 26th June 2013, I attended a thought-provoking symposium where international experts in psychology, anthropology and communication sciences came together to describe current trends in public attitudes towards childhood vaccination. The symposium accurately titled ‘Public engagement and risk communication in child vaccination’ was jointly convened by the London School of Hygiene and Tropical Medicine and University of Sydney School of Public Health. The symposium consisted of five talks, ending with a panel discussion. As opposed to giving a specific run down on each of the engaging talks, I will highlight the key messages that I came away with.

The first talk, delivered by Dr Helen Bedford (UCL, Institute of Child Health) presented the determinants of vaccine uptake. She started the talk by presenting statistics from Public Health England, where uptake for the MMR vaccine for children of 12 month is 95.1%. This subsequently dropped to 92.8% at 24 months. However, what is surprising is the range of uptake across the country, which can go from 79.1 to 99.1%. With herd immunity being at 95%, this is an alarming statistic.

Dr Bedford also presented a selection of reasons for this low uptake, gathered from a Millennium Cohort study. For those parents who do not immunise their children, 47% of the reasons were centered on beliefs and attitudes (e.g., believing vaccines overload the system, do not believe in vaccines, etc.). Whereas, for those who partially immunised (e.g., only missing out a few vaccines), only 38% of reasons were centered on reasons of belief and attitudes, and instead it was more centered around practical reasons (e.g., not having the time, clinic is too far away, forgetting, etc.). In all cases, 67% of reasons were conscious decisions.

Dr Heidi Larson (LHSTM) next highlighted the fact that the impact of anti-vaccine information can be rather slow. Rather, an event today does not impact tomorrow. Instead, it is a slow burn, and the impact may come to a head in a year or two down the line. Further, the implications could be all over the world. One claim echoed by Dr Larson, is that if someone does not have access to the internet in a remote village, how will an anti-vaccine claim populated in the UK impact them? Dr Larson responded to this claim by saying it takes only one person to have access to the internet, and then it is word of mouth. Thus, this highlights the different levels of risk management – which can also be linked to conspiracy beliefs more generally and how such information can travel. 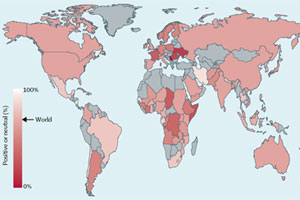 Dr Larson currently explores how information spreads via a variety of methods. One way is via “fast data”, which involves looking at real-time information being spread over the internet. This information is then split into two typologies – positive and negative. If you look at the map above, you can see where the information on vaccines is being spread online across the world, and what typology the information can be defined as. In other maps she showed in her presentation, you can look at a whole country and see the typology of vaccine information being spread online in particular areas. Dr Larson described a scenario, where if an outbreak occurs and the government has a limited budget for communication for vaccinations, you could put a vast amount of resources into a location where there is a lot of negative information concerning the vaccine. As opposed to wasting the resource by directing it somewhere where such anti-information is limited. This is a really interesting possibility, and more information on the project can be found here: http://www.vaccineconfidence.org/

Associate Professor Julie Leask and Dr Hal Willaby (The University of Sydney) then highlighted a variety of sources of vaccine information. One being the GP/family doctor, but they also commented on the rise of the internet. They then went onto discuss a variety of ways to intervene with the vaccine decision process – one being motivational interviewing. As also highlighted in a previous talk by Dr Nick Sevdalis (Imperial College London), parents like to take an active role in the decision process (i.e., decision autonomy). Here, the speakers therefore discuss a respectful and guiding interaction between the health-care professional and parent. Good communication is therefore important in this scenario. If a parent is undecided on whether to vaccinate their child, a bad experience could tip them over the edge.

Finally, Dr Cath Jackson (University of York) and Professor Francine Cheater (UEA) discussed the use of a decision aid. Rather, as with the other speakers, they see the parent having an active role in the decision process to be important. The decision aid they have developed takes the parents though the whole decision process – i.e., discussion both the benefits and the risks of vaccination. It was found in a pilot study that after being given a decision aid, all parents vaccinated their child, as opposed to those given a standard information leaflet about the vaccine, in which only 91% of the parents went on to vaccinate. This does highlight the fruitful use of such a tool on the decision process.

However, as can be seen, conspiracy theories were not highlighted explicitly by any of the speakers. This is not surprising, as research looking at the consequences of conspiracy beliefs is limited – least until my current research as part of my PhD, which aims to empirically explore this. Therefore, I was keen to attend this symposium as I currently have a paper under review, which across two studies demonstrates the impact of exposure to anti-vaccine conspiracy information and one’s vaccination intentions. Thus, for the first time to our knowledge, conspiracy theories have been casually linked with immunisations.

In the context of the symposium, the interventions discussed may be fruitful for parents who are unsure of the risk of vaccines. However, for parents who may believe vaccine data is faked for profit by the government, for example, a different approach may be needed. In the panel discussion, I asked the panel their thoughts on the role of conspiracy theorising in the decision process. All were very interested in my research, and agreed that such beliefs would play a role. The topic of conspiracy theories was also highlighted as being an important area of research. Therefore, I feel the discussions relating to conspiracy theories in this domain have only just begun. The symposium was both engaging and enlightening, and I look forward to when my paper is [hopefully] published, thus highlighting the important role of conspiracy beliefs in the decision process, and prompting future discussions on the topic.

We know that for those who do not immunise, 47% of the reasons are centered on beliefs and attitudes. Could conspiracy theorising therefore play an important role in the decision process? My research certainly suggests so.

This entry was posted in Events, Social psychology. Bookmark the permalink.

5 Responses to Childhood vaccinations: What is the role of conspiracy theorising?