The conspiracy theory label: Not as powerful as you might think

A series of experiments I did last year came up with an interesting little finding – labeling something a conspiracy theory doesn’t make someone believe it any less than if you call it something more neutral. This goes against conventional wisdom that I’ve heard repeated quite a few times online and among people who study conspiracy theories. The journal Political Psychology has just published a paper describing these studies – you can read the whole thing free here (the article is open-access thanks to a generous payment by the University of Winchester).

It’s not like I was sitting and sneering at the idea that the conspiracy theory label was powerful before running this study – I really thought this was going to go the other way. I realized sometime last year that for some reason nobody had demonstrated that the conspiracy theory label affects how seriously people take something. I thought it would be an easy slam dunk. I modified Rob’s Generic Conspiracist Beliefs scale so that one version asked how likely a variety of conspiracy theories were, and the other version asked how likely a variety of ideas were. To this I added a few additional questions that were similar in structure to the GCB items but were about confirmed historical conspiracies – things like MKULTRA, Nixon using the IRS to go after his enemies, and so on. I showed the whole mess to 150 MTurk workers, sat back, and waited for the expected results to roll in. To my great surprise, people who were asked about “conspiracy theories” judged them to be no less likely than people who were asked about “ideas.” (At the suggestion of a reviewer, I also checked out the correlation between the historical items and the GCB items – turns out that people who believe in fewer conspiracy theories are also less likely to agree that MKULTRA, COINTELPRO, etc. were real. Pretty interesting, and I’m sure that everyone will have a strong opinion on why this is. I see three options: 1. People who are more conspiratorially minded are more likely to know about these historical conspiracies because they’re often referred to in conspiracy culture; 2. People who find out about historical conspiracies become disillusioned and from there begin to find it more likely that more speculative conspiracy theories are true; and/or 3. People who agree with one thing will agree with another thing that sounds like it, regardless of knowledge, so even a conspiracy-minded person who had never heard of COINTELPRO would think it’s just the sort of thing the government would do. I think it’s almost certainly a combination of all three, and also that this parenthetical is probably way too long.) 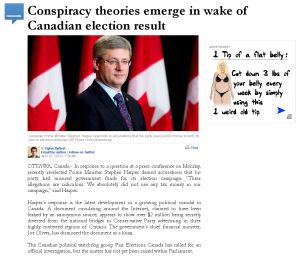 One of the images from Experiment 2. One weird trick for doing psychology experiments!

So, fine. Null result. Well, it was only 150 people. I decided to run down the effect by running a second study. This time I used a statistical power analysis to figure out that I should run 802 people to have a high chance of detecting a relatively small difference between groups. I also wanted to move away from conspiracies that people might have heard of and invent something entirely new. Instead of historical conspiracies or general thoughts about conspiracies, I showed my participants a fake news article about a fake political scandal in Canada (something about tax dollars being illegally funnelled into a re-election campaign). Half of the participants saw the headline “Corruption allegations emerge in wake of Canadian election,” while the other half saw “Conspiracy theories emerge in wake of Canadian election.” They then rated their thoughts on the allegations. The result? Same as before: no difference. The “conspiracy theories” people didn’t take the allegations any less seriously than the “corruption allegations” people did.

So this was pretty interesting. Not the result I’d expected, but that’s science for you. The question now is why there’s no effect when it seems like just about everyone assumed there would be. It’s possible that the label only works under some specific circumstances that these experiments didn’t cover, but even then it seems the label’s hardly as powerful as it’s been given credit for. On the other hand, maybe people in general just don’t have a negative view of conspiracy theories – maybe the intellectual stigma around the term simply doesn’t exist outside of academia (this is what Lee Basham, a philosopher from Wabash College, thinks). I’m not so sure. I think people are probably ambivalent about conspiracy theories. They’re the target of a lot of mockery and derision, and not all of it comes from elites or people who benefit from the system as it is. The paranoid conspiracy theorist is a staple stereotype in fiction. At the same time, though, conspiracy theories are fun and interesting. They’re usually stimulating to think about even if you don’t agree with them. I think this might cancel out some of the negative associations of the term, but I think we have a ways to go before we have a definite answer.

This entry was posted in Social psychology and tagged experimental, psychology, research. Bookmark the permalink.

18 Responses to The conspiracy theory label: Not as powerful as you might think