Authoritarianism and conspiracy theories – what’s the connection? Is there one?

Although I don’t do it as much as I used to, I still enjoy arguing about conspiracy theories with people on the Internet. As I’m generally pretty skeptical of conspiracy explanations, I usually find myself defending whatever the conventional explanation for something is, and as often as not I get accused of believing without question whatever the government (or Big Pharma, or whoever) tells me. Basically, people accuse me of being an authoritarian, which I’m decidedly not (much to my parents’ dismay).

But there’s some evidence pointing the other way as well. In a separate study, Swami and his colleagues at the University of Westminster showed that 9/11 conspiracy beliefs are associated with negative attitudes toward authority, and John W. McHoskey found that people high in authoritarianism were more likely to be anti-conspiracist when it comes to the JFK assassination.

So what’s going on here? It looks like the content of the theories is what matters. The research on the psychology of authoritarianism has long shown that authoritarians tend to derogate and scapegoat minorities, which seems to be what’s going on in a lot of these anti-Semitic cases: a minority is being blamed by the majority for the ills of society. Swami’s Malaysian study actually proposes that the anti-Semitism shown by the Malaysian respondents might be a proxy for anti-Chinese racist attitudes: there are very few Jews in Malaysia, so Malaysian authoritarians might displace their ethnic aggression from a relatively powerful and socially accepted minority group (Chinese) onto one that is almost non-existent in their society and so can be scapegoated without consequence (Jews).

In contrast, a lot of modern conspiracy theories have a very populist and anti-government tone. They blame authorities for the evils of society, not minorities – the American government blew up the Twin Towers, MI6 killed Princess Diana, and so on. So it makes sense that authoritarians would be less likely to believe that their governments are conspiring against them and anti-authoritarians would find this idea more appealing. There’s no uniform association between authoritarianism and conspiracy belief – it seems to depend on the specifics of the theory in question. 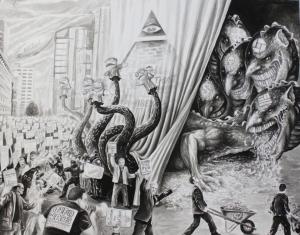 Figures in the crowd like Jesse Ventura and Ron Paul represent the new conspiracism, while the Jewish-caricature bankers are a throwback

Still, antisemitism used to be much more socially acceptable than it is now, and its influence persists in the darker corners of even some modern conspiracy theories. You can see this a lot in editorial cartoons, where conspirators, especially bankers, are portrayed as having exaggerated hooked noses and tentacles straight out of Der Ewige Jude. The artists probably have nothing against Jewish people, but are instead following the conventions of anti-banker propaganda that were first established in the early 20th century, when Nesta Webster was in her prime, the Protocols of the Learned Elders of Zion were still a going concern, and people were generally just really worried that the Jews were up to something.

22 Responses to Authoritarianism and conspiracy theories – what’s the connection? Is there one?